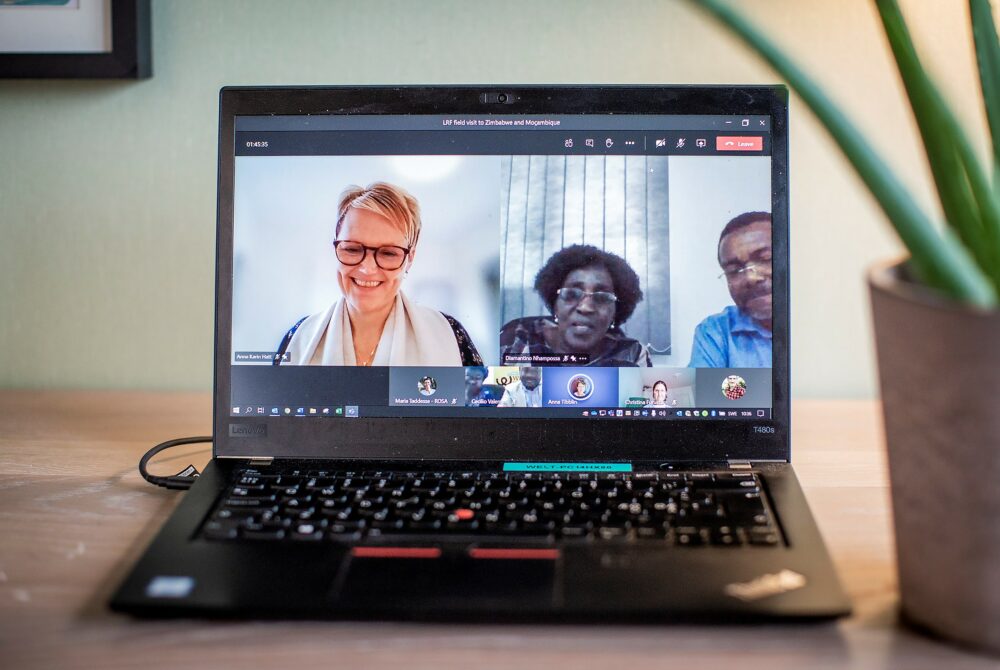 Anna-Karin Hatt, CEO of the Federation of Swedish Farmers (LRF), today embarked on We Effect’s first ever virtual field trip. She met with farmers and partner organisations in Zimbabwe and Mozambique, despite being more than 10 000 kilometers apart.   “This was an important meeting at a difficult time for farmers in southern Africa” said Anna-Karin Hatt”.

The trip was an opportunity to understand how Covid-19 has exacerbated an already serious situation for farmers in the region. Several million people lack enough to eat, droughts and cyclones have affected many small-scale farmers.

– When the country shut down no transports were allowed, I couldn’t harvest and sell my crops. I had spent a lot of money and effort, but ended up not being able to pay my bills, said farmer Anesu Truzmbah, who lives in Mashonaland Central in Zimbabwe..

Their testimonies are shared by many small-holder farmers in the region. In Zimbabwe alone, 8.2 million people are in urgent need of food.

– Agriculture is  the foundation of Zimbabwe’s economy, but food production must increase. Now a large part of the food is imported and this makes the country particularly vulnerable. Farmers must be supported to develop their farms so that they can feed their own population and withstand the effects of climate change. The government has now recognized that agriculture is critical to society, said We Effects country manager Göran Forssén.

The digital study trip also showed that farmers in Sweden, Zimbabwe and Mozambique share many challenges. The right to land and job creation are some examples. More support is needed for long-term efforts that reduce vulnerability and build stronger communities, beyond Covid-19, participants said. The role of cooperatives was particularly highlighted.

– The role of cooperatives needs to be strengthened, said Rebeca Gomes, who is a board member for We Effects partner organization AMPCM and a member of the cooperative Coopamim (Cooperatives of agriculture micro importers).

The Cooperatives’ Organization AMPCM and the Zimbabwe Farmers Union, ZFU, are two of 40 partner organizations supported by We Effect in the region. In total, some 500 000 members are supported in the countries, more than half of them are women.

ZFU gathers 60,000 small-holder farmers in the country and supports its members with training in cultivation techniques, business development and works to strengthen farmers’ rights in the country.

The Corona crisis has had a major impact on the business, but Prince Kuipa, chief economist at ZFU, also said that the organization had managed to reshape operations.

– We use mobile broadband and Teams and Zoom to continue to hold training sessions for our members, for example on how farmers can cope with drought and other effects of climate change.

Anna-Karin Hatt’s trip was planned to be carried out physically, but was now instead the first virtual trip arranged by We Effect. The connection was not always the best, and some nuances disappeared in the translation, but nevertheless, the premiere trip was a success.

– A physical study trip gives an even stronger impression, but this was a very valuable way of meeting people that are supported by We Effect. The problems are great during the corona crisis, but there are bigger and more far-reaching challenges, such as lack of literacy and climate change. We Effect is LRF’s way of supporting farmers to help each other across borders. It feels extremely important, said Anna-Karin Hatt.