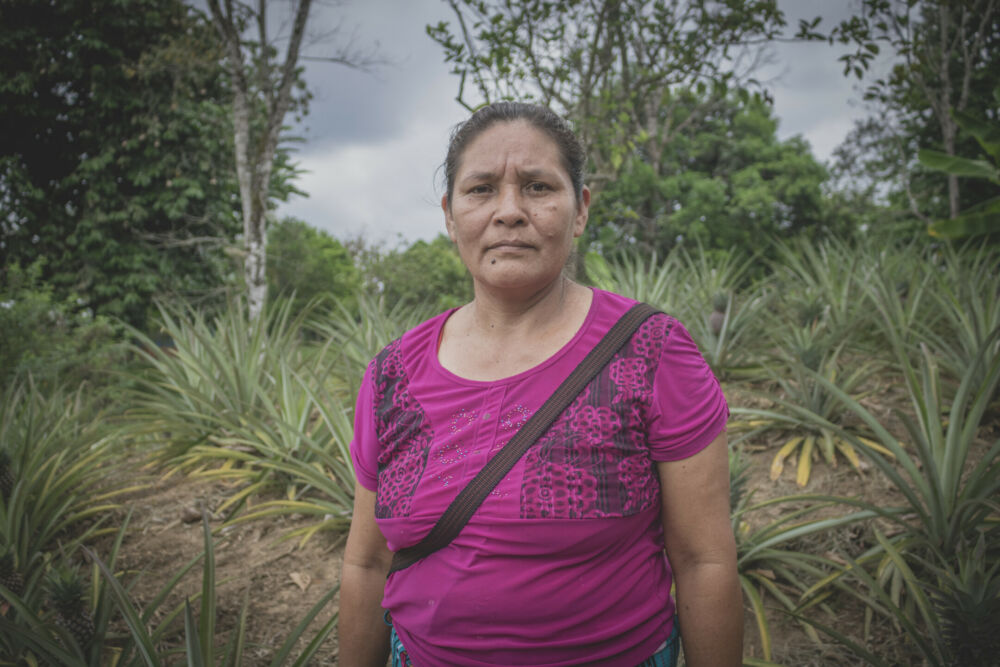 Felipa López Mazariegos from Guatemala is one of many farmers that will be affected by the development aid cuts. Photo: Philip Krook.

Civil society organisations around the globe are turning to the Prime Minister of Sweden in an e-mail campaign to raise their concerns about the drastic reduction in development aid: “The development aid cut is catastrophic in times of increasing hunger, poverty and shrinking democratic space”, says Bertha Isabel Zúniga Cáceres, General Coordinator for Copinh in an open letter to Magdalena Andersson.

Copinh — founded by the murdered environmental defender Berta Cáceres — initiated the e-mail campaign, with support from We Effect. The purpose of #DearMagdalena is to protest the Swedish Government’s decision to cut its development aid with 80 million USD in 2022.

The initiative has now spread to a long range of civil society organisations from all around the world now joining in on the campaign.

In its letter to the Prime Minister, Copinh highlights that the world is in the worst humanitarian situation since World War II with 1.7 billion people — one-fifth of the world’s population — at risk of hunger and poverty, according to the UN Secretary General.

“With this in mind, the historic and tragic decision to cut development assistance will impact us in unprecedented ways. Our training to ensure food sovereignty are eliminated”.

The letter — written and signed by Bertha Isabel Zúniga Cáceres, General Coordinator for Copinh and daughter to Berta Cáceres — explains that the decision eliminates activities to promote respect for the territories that produce the food of 200 indigenous Lenca communities. It also stops them from carrying out legal actions to demand justice for the murder of Berta Cáceres.

The Albanian farmer’s organisation Agrinet has joined the Honduran initiative and sent its own letter to the Prime Minister, explaining that the Swedish Government’s decision comes at the worst possible time:
“Poverty levels are rising in rural areas as a result of rising prices of agricultural inputs and fuels. Rising prices for basic foodstuffs make poor people poorer”.

Agrinet says that all the positive results achieved through support from project implementation now becomes unsustainable:
“Increased poverty in rural areas will result in the abandonment of the village by residents and increased emigration. Dear Magdalena, we now encourage you to stand with us in these desperate times and re-evaluate the decision to cut development assistance”.

“We, Tanzania, bear witness of the UN reports. With this in mind, the historic and tragic decision to cut the development assistance will impact us in unprecedented ways”, writes the organisation MVIWAKI in their letter to the Prime minister.

The budget cut is meant to cover costs for Ukrainian refugees

In times of record high numbers for hunger, shrinking space and climate crisis, the Swedish International Development Cooperation Agency’s (SIDA) budget to support civil society has been reduced with 80 million USD in 2022. This equals a budget cut of 39 percent.

The rational for the decrease is to cover costs for refugees fleeing the war in Ukraine to Sweden. Consequently, the Swedish development aid budget has been decreased with a total of 1 billion USD in 2022. We Effect welcomes that Sweden supports refugees, but it should not be done on the expenses of people living in poverty.

The initiative #DearMagdalena is open for all organisations to join, partner organisations write directly to the Prime Minister and publish their open letters on social media using the hashtag #DearMagdalena. The goal is to change the Swedish government’s decision to with tract the 9,2 billion SEK cut in the development aid budget.

Letter from CERD, Bosnia and Herzegovina