The Philippine Senate has passed the billion dollar “Coco Levy Trust fund bill” – supporting more 3,5 million smallholder coconut farmers in the country.    “We Effect’s partner organizations PAKISAMA and Kilus Magniniyog have worked hard for for years to get this bill approved. When approved by congress, this could be a historic win for Filipino coconut farmers” Jessica Soto, We Effect country manager, said. 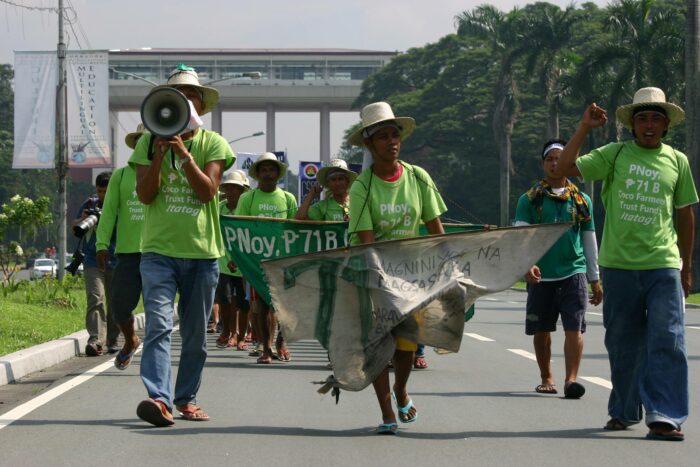 The proposed measure is aimed at letting poor coconut farmers benefit from taxes exacted from them decades ago, now worth around P76 billion in assets.

Under the bill “Coconut Farmers and Industry Trust Fund Act,” the government is mandated to turn over 75 billion pesos, equivalent to 1,5 billion dollars, in the next five years to create a trust fund for coconut farmers in the country. Approximately 3.5 million coconut farmers from 68 coconut producing provinces, owning not more than five hectares who belong to the poorest sector in the country.

“The coconut farmers are the poorest in the country. They earn only about P1,500 a month. This fund which rightfully belongs to the coconut farmers, should be plowed back to them for their own direct benefit,” Sen. Cynthia Villar, chairperson of the Committee on Agriculture, Food and Agrarian Reform and principal sponsor of the bill, said.

The Senate will now wait for the House of Representatives (HOR) version of the coconut levy bill to be passed. Sentor Villar expressed confidence that the enactment of the law will be swift as concerns that caused the veto of the former version of the bill were all addressed.

At its current state, the bill excludes farmer representatives from the trust fund management committee.

“We now need the congress to pass their version of the bill, and we need farmer representation to the Fund Management body” Jessica Soto said.

Fact: Coco Levy Trust Fund
P5B of the trust fund will be used upon enactment of the law for the ff. programs. In addition to the programs of the PCA which will be given a separate budget.

Under the measure, the Philippine Coconut Authority Board has been reconstituted to compose the Secretaries of the Departments of Trade and Industry, Budget and Management Finance, and DOST and PCA, and three farmer-representatives from Luzon, Visayas and Mindanao.