Home / News / Ann Linde: Gender equality is crucial for the right to food

Ann Linde: Gender equality is crucial for the right to food 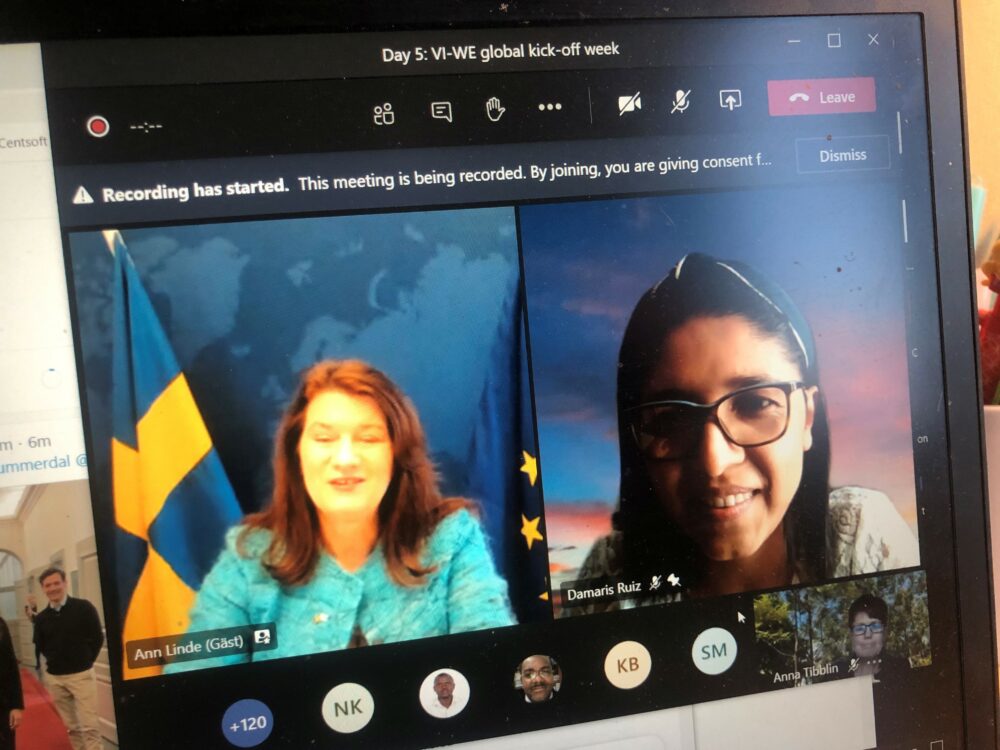 The Swedish Minister for Foreign Affairs Ann Linde participated during the last day of Vi Agroforestry’s and We Effect’s first global and digital kick-off. During her presentation, she stressed the importance of joint efforts to combat multidimensional crises like the Covid-19 pandemic, increasing hunger and the climate crisis. She stressed the importance of increased gender equality in all actions.

The Swedish Minister for Foreign Affairs pointed out how the Covid-19 pandemic had contributed to a rise in hunger and food insecurity around the world, as well as a rise in extreme poverty for the first time in decades. Also, as We Effect and Vi Agroforestry has often pointed out, most people that live in poverty are women.

– We must continue to advocate for greater gender equality and women’s and girls’ full enjoyment of human rights, including sexual and reproductive health and rights, the Minister therefore said.

To work for achieving this, Sweden is engaged in a global Action Coalition for Economic Gender Equality. Another current strong focus of the Swedish government is on the Organisation for Security and Cooperation in Europe, of which Ann Linde has been appointed chairperson in office. In this work, Sweden aims to promote gender equality in a broad transatlantic region.

– Civil society organisations like We Effect and Vi Agroforestry can help to ensure that the goals of our feminist foreign policy translate into concrete actions in the field. The work you are doing, with investment in cooperative arrangement, small-scale farmers and tree planting, are important measures for mitigating the distorting impact of the current crisis on women farmers and on hunger, food insecurity and poverty. It also helps to secure important land tenures and land rights for female farmers, said Ann Linde.

Another important issue for the Swedish government is of course climate change. In this aspect, the interconnectedness between climate change and other areas needs to be further analysed and stressed. The Minister for Foreign Affairs also brought this up during her speech:

“The relationship between climate change, the loss of biodiversity, sea-level rise, the depletion of our oceans, food, poor health and poverty, is twofold. Unsustainable food production contributes to greater greenhouse gas emissions and water scarcity, and increased risk for the zoonotic infections. Climate change also has a harmful impact on biodiversity and ecosystem services, and diminishes the plant-based food supply. We must address the impact of climate change on food security from both standpoints”

The Swedish government recently launched an initiative to increase engagement in biodiversity in international development cooperation to contribute to this work. The upcoming United Nations Food Systems Summit, where Sweden will participate, will hopefully also prove transformative in this respect.

The next session of the conference with the Minister for Foreign Affairs contained a number of questions being asked to the Minister from among others regional managers with the organisations.

– To better support small-holder farmers, we must look to the challenges that these farmers face from a holistic perspective. Investments to support small-holding farmers must therefore consider the important synergies between climate change, biodiversity, gender, gender equality and food security, she said.

Ann Linde further promised to return to We Effect and Vi Agroforestry with an invitation for dialogue for an action plan on economic gender equality.

Diamantino Nhampossa, Country Manager in Mozambique for We Effect, then asked how Sweden can contribute to supporting Mozambique and other countries facing the increasing impact of climate change?

In 2022 the world will be celebrating the 50 year anniversary of the first United Nations conference on the human environment that was held in Stockholm. So we will host the Stockholm 50+ high-level meeting to enhance action and sustainable transformation, said Ann Linde.

To further mitigate severe climate change effects, Sweden will funnel some of its development aid to projects that aim to support sustainable management of a country’s natural resources and agricultural practices that are more resilient to climate change, as well as access to renewable energy.

Next up, Kisha Beringuela, Advocacy Officer with We Effect in the Philippines, asked what could be done to ensure that companies respect human rights? Does Sweden also need a law for companies on Human Rights Due Diligence?

Sian K. Maseko, Senior Gender Advisor to We Effect, then asked what Sweden can do to advocate for an even stronger feminist response to the corona pandemic, including women in rural areas in low-income countries?

– We must also ensure that policies that are formulated in response to the Covid-19 pandemic take gender equality aspects into consideration. We prioritise striving for economic and social reform for gender equality to eliminate discriminatory legislation, gender policy in the labour market and a feminist trade policy, said Ann Linde.

Damaris Ruiz, programme director for We Effect in Nicaragua, then informed the Minister that We Effect has had to phase out its operations from Nicaragua due to the new Foreign Action Law in the country. She also asked what role Sweden and the European Union can play in battling the shrinking civic space?

– Through our drive for democracy, we are stepping up our work to defend democracy globally. We are working with partners around the globe, including cross-regional groups of partners that are committed to this agenda. Crises like the Covid-19 pandemic risk to further compounding the shrinking democratic space and must not be taken as an excuse for undue restrictions of democracy and human rights, answered Ann Linde.

She also pointed out that more than 25 percent of the Swedish development aid is dedicated to strengthening human rights, democracy and the rule of law in partner countries. Much of this support is channeled through the civil society. When it comes to Nicaragua specifically, the Swedish government is putting pressure on the Nicaraguan government to bring the repression of political opponents, demonstrators, journalists and civil society to an immediate halt.