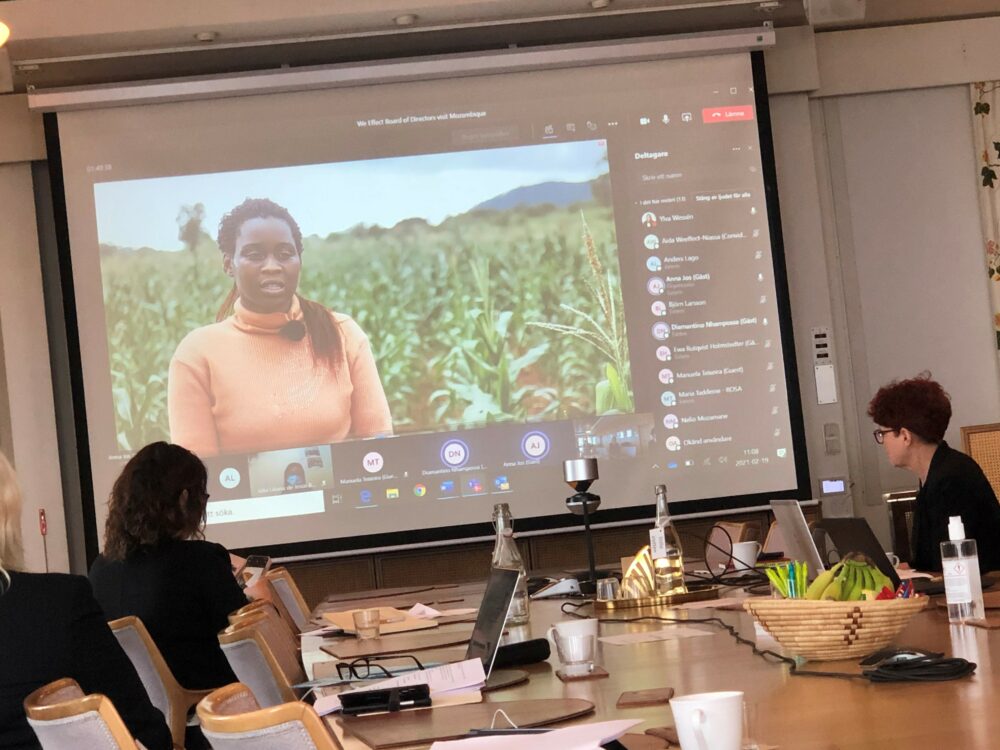 We Effects' board of directors, representing leading cooperative companies from Sweden, carried out a virtual visit to Mozambique. They met with small-holder farmers organisations, the Swedish embassy and government representatives to discuss increasing hunger, climate change and Covid-19.

“We Effects’ efforts are needed more than ever in Mozambique. It is important that we work side by side with people across all borders” said Lotta Folkesson, chairman of We Effect and board member of the Farmers Union of Sweden, representing 140,000 Swedish farmers.

The members of the board listened to eyewitness reports from small-holder farmers in Niassa province, where as many as 43 percent of the children are malnourished in the province of Niassa.

“Women are at the forefront of fighting hunger and malnutrition,” said Clara Armando, at We Effects’ partner organization FOFeN.

FOFeN works for women’s participation, to improve women’s access to land and to create better opportunities to grow more and nutritious food. The board members got to see via a live broadcast how sweet potatoes, beans and peanuts can strengthen the traditional corn porridge.

“The situation is very worrying in Mozambique. But during our digital visit, we got to see evidence of positive development, and it gave me hope” said Ylva Wessén, CEO of mutual insurance company Folksam, with 2,4 million customers.

An important method for disseminating knowledge about, for example, sustainable agriculture is study circles. With support from We Effect, FOFeN has started 547 study circles in Niassa that organize thousands of women and men.

“Where we work, we see that fewer women and children are malnourished” said Manuela Texeira, who is coordinator at FOFeN.

Gender equality is a central part of the work within We Effects’ efforts in the country. This was highlighted by the national farmers’ organization UNAC.

“I hope that we can scale up the efforts in Mozambique so that more women working in agriculture receive more support, they are vital to all development” said Helen Persson, director for memberships at the Stockholm Consumer Society, representing 850,000 members.

Working at the national level with decision-makers and legislation that strengthens small-scale farmers, such as women’s right to land, was an important point of discussion during the trip.

We Effects’ work in Mozambique is mainly funded through a special program that receives support from the Swedish embassy. The delegation met with Ambassador Mette Sunnergren, who spoke about Sweden’s involvement in the country.

“Civil society is more important than ever,” she explained.

Increasing gender equality and the use of sustainable agriculture are important parts of development assistance in the country. Small-scale farmers, and not least women, are crucial in meeting hunger, conflict, the climate crisis and contributing to greater biodiversity.

“80 percent of the population in Mozambique is dependent on agriculture and therefore the use of land is a very important issue” Mette Sunnergren explained.

The State Secretary for The Ministry of the Environment and Land in Mozambique said that the right to land, not least for women, is an important part of developing the country and increasing resilience to climate change.

In an ongoing national project that We Effect is part of, two million farmers will have the right to their land. Special focus is on female farmers and sustainable methods that increase food production.

“Sweden’s support in Mozambique is very important. We must work locally in rural areas with ownership and increased knowledge to counteract the climate effects, explained Hortencia Massinga, State Secretary at the Ministry of the Environment.