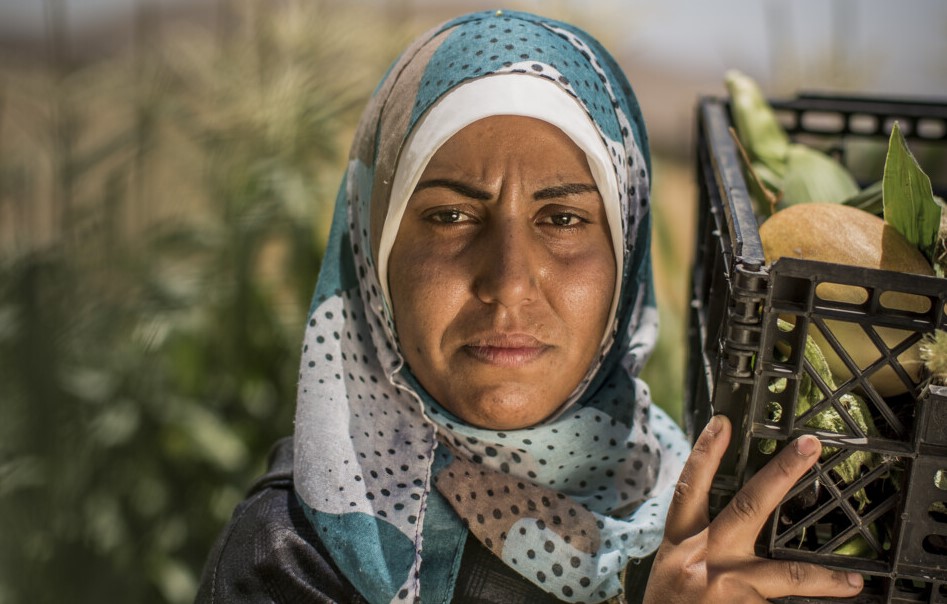 Iman Jamel Turkman, chairperson in a women's cooperative in Palestine, where food prices are now rapidly increasing due to the fact that imported products från Ukraine and Russia don’t reach the country. Photographer: Markus Lundstedt

The war in Ukraine is hitting hard even outside the country's, and Europe's, borders. People living in poverty around the world are now suffering from increased hunger and a deteriorating security situation when food prices rise. This was identified in a status report made by We Effect in the countries where the organisation works.

– For the people already living on the poverty line the conflict is a catastrophe, we can see a huge increase in hunger and poverty and a higher risk that people have to leave their homes, says Anna Tibblin, Secretary General of We Effect, who right now is located in Southern Africa.

Ukraine and Russia are major exporters of wheat, sunflower oil and maize. Due to the interruption of exports, the prices of these goods have risen by up to 50 percent. It has immediate consequences for large parts of the world’s population, for which these basic commodities constitute staple food.

– Even before the war, people we work with gave testimonies about increased prices for food, seeds, fuel and other necessities as a result of the pandemic. They also see that climate change, with more droughts and more floods, makes it increasingly difficult to produce food, says Anna Tibblin.

Rising prices and food shortages are also leading to political controversy and social unrest. Many of the world’s countries have not recovered from the economic shocks of the pandemic. Now the situation is further aggravated. This can create more conflicts and force people to leave their homes. The lack of food was a contributing factor for the Arab Spring with war and conflict as a result, not at least in Syria.

According to the UN Food Program, the world is in the worst humanitarian situation since World War II.

– There is a clear risk of protests and increased social unrest. In this region, families spend more than half of their income on food. Increased prices create desperation, says Anna Tibblin who has visited Eastern and Southern Africa the last weeks.

We Effect has identified how the war has affected people in the 20 countries where the organisation is working. It’s still too soon to draw long-term conclusions as the situation is changing rapidly. But it’s clear that the prices on basic needs are increasing and that it’s contributing to an already serious situation.

Europe:
More than 300 000 people have already fled from Ukraine to Moldova. The country is the poorest in Europe and has declared a state of emergency. For the farmers the export markets to Ukraine and Russia have completely been cut off. The farmers have large stocks of winter seeds that no one wants to purchase. Cabbage, potatoes, honey and nuts are only a few examples of goods.

– We know that the farmers with small margins will not be able to afford to grow the summer crops. It’s already a tough situation but can get worse in the long run, says Anneli Leina, Region Director, We Effect in Europe.

Southern Africa:
The prices of wheat, cooking oil and fertiliser are increasing. Mozambique, which imports many products from Russia and Ukraine, reports that the price of fuel has increased by 12%. That makes public transport and other services more expensive. There are risks of protests and increased social unrest due to higher living expenses, above all in the bigger cities where people cannot grow their own food. Previously there’s been bread riots in Mozambique as well as Zimbabwe.

Eastern Africa:
Increased prices on food and fuel. The critical export of coffee, fruit and flowers from Kenya and Uganda to Russia is now cut off. This will affect these countries’ economies at large. Some unscrupulous companies take advantage of the situation and raise the prices on normal household goods with the war as an excuse.

Latin America:
The prices on wheat and fuel are increasing and there is a high risk of increased inflation. In El Salvador, farmers organisations report that there will be difficulties for them to grow food due to high prices on fertiliser and fuel. The price on raw oil has increased by 11 percent since the start of the conflict.

Asia:
The food prices in Palestina increase rapidly due to the fact that imported products from Ukraine and Russia don’t reach the country. Almost half of the crops, diaries and eggs consumed in Palestina are imported from Ukraine. Sri Lanka exports normally a big part of their tea production to Russia and Ukraine, and the conflict is something that affects their already hard wounded economy.

Standing up for our local food heroes!
Europe

Standing up for our local food heroes!

The role of microinsurance in the climate change fight
Eastern Africa

The role of microinsurance in the climate change fight