Validating rural women as the bedrock of food security 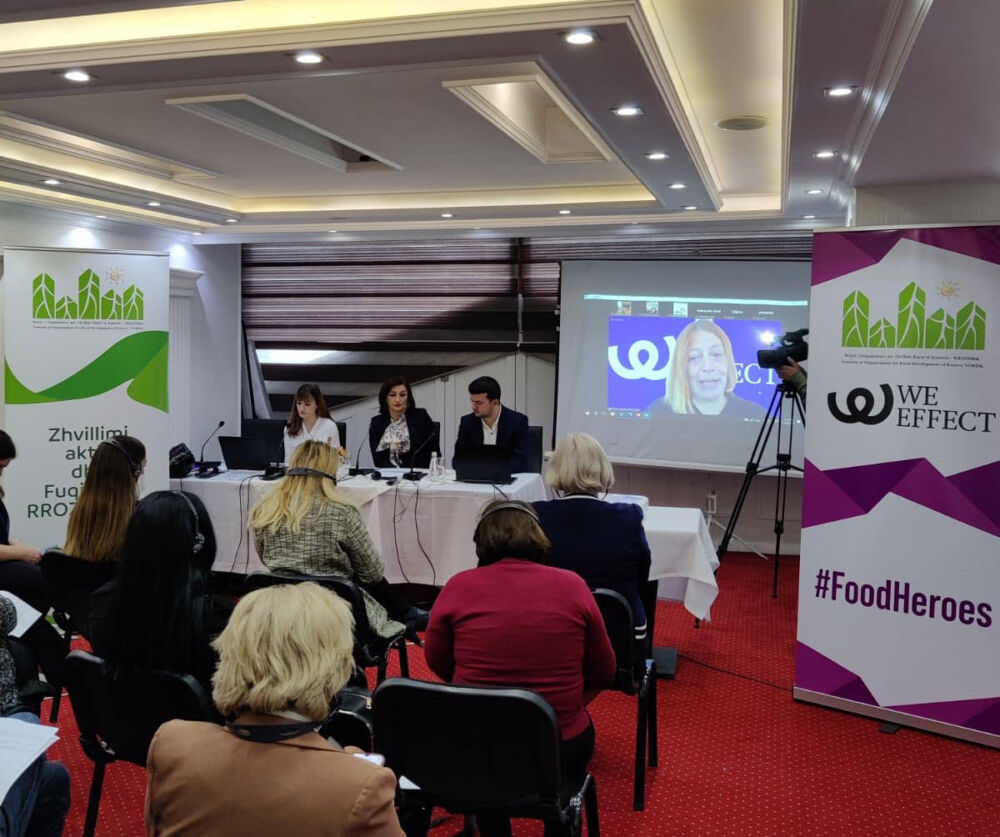 On International Day of Rural Women and World Food Day, on 15 and 16 October, a series of events took place in the countries in Europe region where we operate. The focus was on the socio-economic empowerment of rural women as a precondition for achieving healthier, more sustainable, and more equitable food systems for all.

“Empowering rural women is crucial for the prosperity of the rural communities. We focus on gender equality because we know that when rural women are able to own farmland, to earn and control their income, food security is strengthened, and positive ripple effects are created across their families, communities and societies,” said Anneli Leina, Regional Director of We Effect Europe in her opening speech at the event organized in Prizren, Kosovo, by our partner organisation the Network of Organisations for Rural Development in Kosovo (NORDK).

Regional Director Anneli Leina further emphasized that closing the gender gap in agriculture is therefore not just a women’s issue, but also a family issue and community issue. Moreover, the empowerment of women and equal opportunities for both sexes are fundamental in reducing poverty.

The event in Kosovo, a combination of a conference with a panel discussion followed by a fair, was attended by more than 40 rural women from all parts of the country.  The discussions focused on gender equality with sharing examples of rural women’s activism and presentation of the findings and conclusions from the Food Systems Summit dialogue in context of Kosovo and the key issues of interest for the country.

In Moldova, our partner organisation National Farmers Federation of Moldova (NFFM) organized a round table on the topic Rural Women’s Access to Socio-economic Opportunities in Agriculture, supported by both We Effect and UN Women.

Minister of Agriculture and Food Industry of Moldova, Viorel Gherciu took part in the event along with Marcela Nistor, member of the Moldovan Parliament and representatives from the Swedish embassy in Moldova.

The achievements in the domain of gender equality and women’s emancipation along with the study – Gender Disparities in Accessing Socio-economic Opportunities in Agriculture, as well as the follow up achievements in regard to the CEDAW Report 2020, were in the spotlight of our partner’s presentations and discussions. The event, attended by around 35 rural women from the country and various stakeholders, was concluded with recommendations being passed to the government in a form of a resolution.

In Albania, the Pro Rural Women event was held at the premises of the Ministry of Agriculture and Rural Development of Albania with participation of Agriculture Minister Frida Krifca, NGOs and other key stakeholders. The important role and contribution of rural women in food security and rural poverty reduction was discussed acknowledging the great impact that rural woman have on agriculture and rural development.

At the event, supported by our partner organisation the Balkan Rural Development Network (BRDN) many rural women from different parts of Albania participated discussing their needs, challenges and aspirations, sharing inspiring models of their social-economic empowerment and jointly identifying practical solutions to their key challenges. A fairly good portion of these rural women are members of our Albanian partner organisations – AgroPuka and Agrinet, who also presented the tastes of the Puka and Korca regions at the fair of local products, that took place at the end of the event.

Apart from this bigger event in Albania, our partner BRDN, through the networks of Montenegro, Serbia, Croatia and Bosnia and Herzegovina, additionally supported smaller scale national activities in these countries with about 20 participants.

Also smaller in size but important for the Roma community from the rural areas of Albania was the event organized by our third Albanian partner, Amaro-Drom. The event was focused on the importance of the rural women for food security. Participants at the event were leaders of Roma organizations, successful women in business and Roma rural women. The activity incorporated a small fair and a march of all participants at the end of the event.

In Bosnia and Herzegovina, both of our partners, Vive Zene and CERD, organized local fairs with natural local products and food. CERD with their member women organization “Osmijeh zene” Laktasi organized an exhibition of handcrafts and food, a film screening about the critical role of women in agriculture and a workshop centered on preventing domestic gender-based violence.

Vive Zene organized the traditional fair of rural women’s products in city of Tuzla where 70 women from the surrounding rural areas participated with their farm production. The women mainly presented their organic products, homemade processed food and drinks, such as jams, ajvars and juices, as well as handcrafts.

In North Macedonia, due to the election silence before the local elections on 17 of October, the planned advocacy events were postponed. Our Macedonian partners, the National Federation of Framers (NFF) and the Rural Development Network (RDN) are organizing an online conference on women’s economic empowerment in the context of sustainable food systems that will take place on 27 of October, with planned participation of Swedish embassy and representatives from the competent ministries in the country.