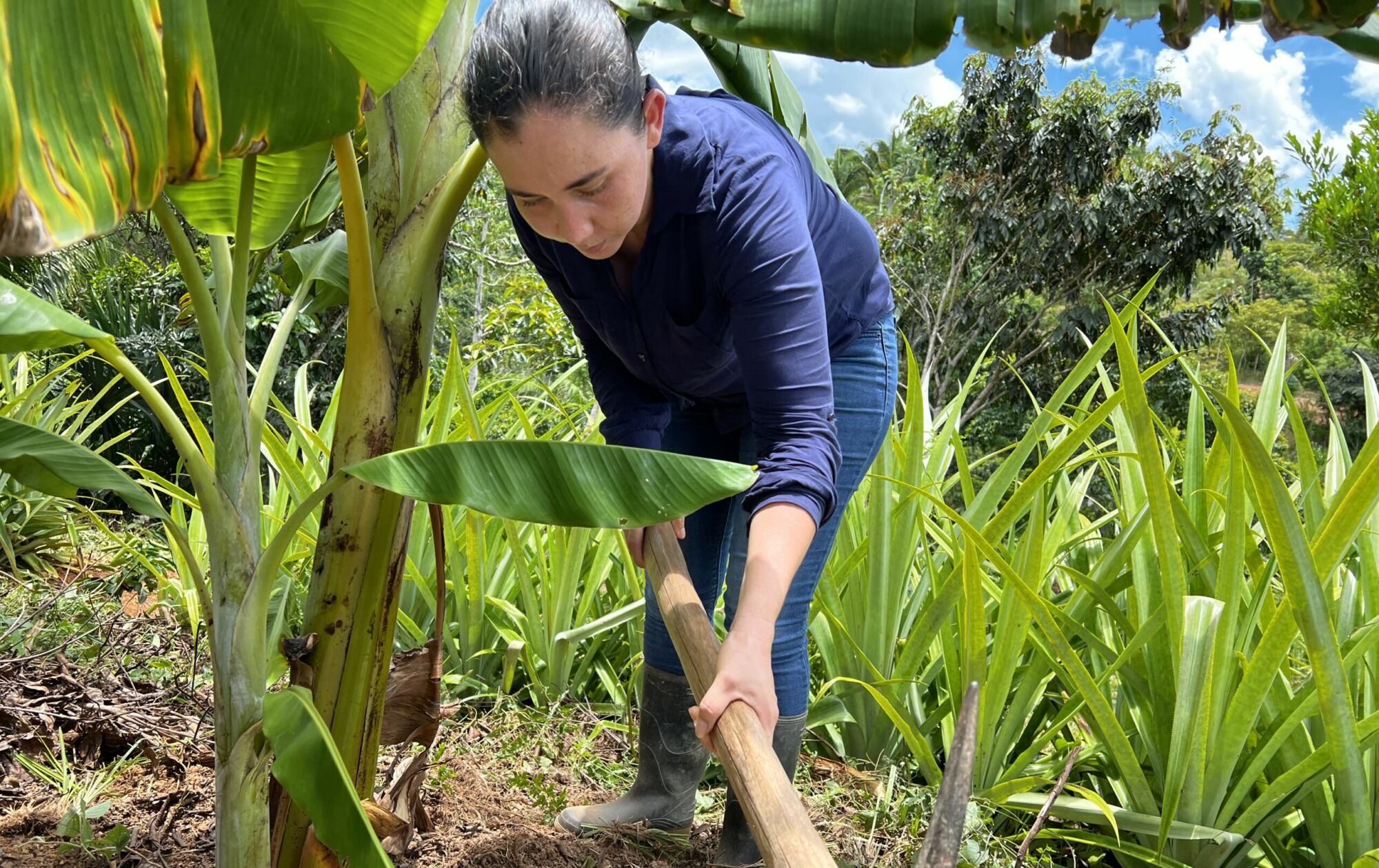 Miriam Cruz Photo: Rodwell Arrazola
Miriam Cruz Photo: Rodwell Arrazola
With 80% of farmers globally being smallholder farmers, providing 30% of the world’s food production, a healthy, safe and predictable environment is crucial to continue to live off their lands and secure the right to food. Unfortunately, the impacts of climate change are becoming more and more evident for smallholder farmers, who bear the brunt of the crisis while having done very little to contribute to its causes. Having limited access to natural resources such as water and fertile land may further push smallholder farmers into poverty and is a driver for political tensions and conflicts. This is climate injustice.

Agriculture, forestry and other land uses contribute to 22% of net global emissions. Most of  these emissions come  from large-scale industrial farming practices and deforestation.
According to IPCC’s sixth assessment report (2022), farming system approaches like agroecology and agroforestry can be a significant contributor to mitigation pathways. These types of methods have potential to sequester significant amounts of soil carbon and reduce emissions from on-field practices, such as fertiliser and manure management. IPCC also identified with a high level of confidence, that agroecological principles and practices are feasible climate adaptation options for the future. Sustainable land management and agroecology not only support farmers to adapt to the effects of climate change but also restore ecosystems, contribute to biodiversity, change increase to strenghten resilience, and support climate change mitigation.

Farmers, especially smallholder and female farmers, are generally rarely included in national and global climate decision-making forums. This non-inclusion has contributed to the low levels of climate funding targeting smallholder farmers’ concerns and adaptive technologies. The share of funding to the agriculture and land use sector has almost halved between 2000 and 2018, with only 1.7% of the total climate finance tracked annually being channelled to bring benefits to smallholder agriculture actors in developing countries. The voices of smallholder farmers in climate negotiations now need to be heard.

While climate change is a major source of injustice that requires global solutions, the effects of climate change are not evenly distributed and the underlying structural injustices need to be addressed in national and international climate policy. Indigenous peoples and local communities manage about one third of the world’s lands and play a crucial role in mitigating climate change and sustaining ecosystem services. Yet their lands, safety and rights are often under great threat – and they are rarely given influence over political decisions. Their voices need to be heard and respected without fear of reprisals.

Loss and damage is and will continue to harm the most vulnerable, making the issue a matter of climate justice. Those who have contributed the most to the climate crisis must take the greatest responsibility to rapidly make financing for loss and damage available, e.g. in cases where affected communities cannot adapt to climate related disasters without having to relocate. Provisions in this regard are currently absent under the UNFCCC.

Scale up focus and finance for adaptation and resilience

As stated in the Paris Agreement, adaptation measures are as important as mitigation actions – yet proportionally, they are receiving significantly less funding. This must change. Disaster risk reduction (DRR) and resilience measures are equally important as the frequency and intensity of climate-related disasters increase. However, funding mechanisms for DRR and resilience are currently insufficient. This funding needs to take the entire disaster cycle, including enhanced anticipation, prevention and recovery into consideration. Finance for adaptation and resilience needs to be transformative, meaning that it needs to move away from being merely reactional, looking only at present and near-time risk. 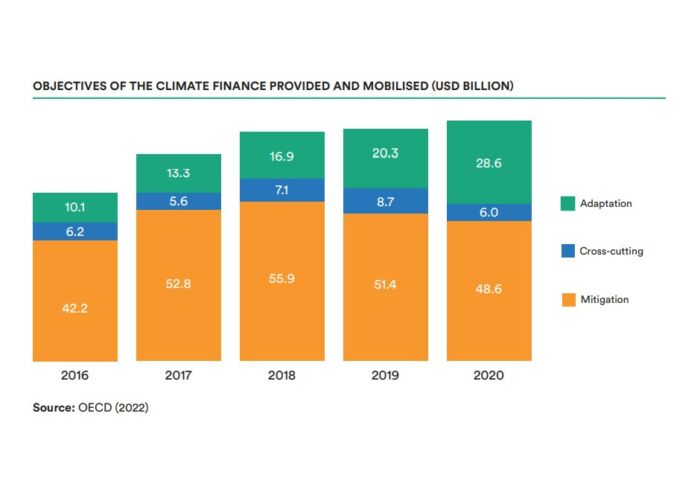 Funding for adaptation is increasing but still far from a 50–50 balance with mitigation.

Agriculture has great potential to become more resilient and contribute significantly to climate change adaptation and mitigation as well as climate justice if decision-makers adhere to a rights-based approach. Major investments are needed in the agriculture sector to facilitate poverty reduction and ensure food security. Sustainable agriculture and agroecological approaches should be the engine for this transformation. Farmers should be supported in taking realistic steps towards ensuring sustainability, productivity and profitability, based on knowledge about the changing climate and weather patterns. This includes practices that allow communities to take ownership of their production and consumption of food. To achieve this, funding is needed and it needs to reach smallholder farmers.

Developed countries and multinational companies have contributed to the majority of historical emissions and are responsible for the climate crisis we are currently in. This has often been at the expense of less developed countries through colonisation and exploitation of their natural resources.

The majority of international climate finance today is in the form of loans, with only just over 25% provided in the form of grants or subsidies. When finance is provided in the form of a loan, the recipient becomes further indebted, while the lender can profit from the interest rates. It is therefore unacceptable that less developed countries, many of which are already facing severe debt distress, are forced to take on even more debt to cope with the climate crisis. Those who have contributed the most to the climate crisis must take the greatest responsibility for solving it. It is unacceptable that extractive industries and companies are allowed to continue putting high pressure on natural resources, polluting and contributing to climate change without legal and financial remedies.

There is a great need to address both the climate change crisis and biodiversity crisis at the same time. Healthy ecosystems protect communities from climate change impacts like extreme weather, and nature-based solutions could provide up to 37% of our climate change mitigation needs as per the Paris Agreement. Thus, the degradation of ecosystems and the decline of biodiversity exacerbate climate change and threaten the natural processes which provide clean air, water and food.

Addressing this interconnectedness is important and one means by which to do this is agroecology. It moves beyond environmentally sustainable agricultural practices to also focus on empowering farmers to achieve food sovereignty. It also lessens dependence on costly mineral fertilisers and pesticides while also increasing food diversification. Diversifying food production improves resilience and sustainable rural livelihoods while at the same time supporting biodiversity and the management of natural resources. This increases independence and diversifies income sources for smallholder farmers.

Each country has a responsibility to contribute to climate action. The current set of NDCs, however, are not on track to achieve the goals of the Paris Agreement, in fact they will lead to a temperature increase of at least 3°C by the end of the century. According to IPCC, there is an implementation gap between the projected emissions under current policies and the projected emissions resulting from the implementation of the unconditional and conditional elements of the NDCs. While all parties have submitted at least their first NDC, a lack of adequate finance and political commitment is contributing to the varying level of ambition and quality. Strong commitments from all countries along with action to back up those commitments are now needed.