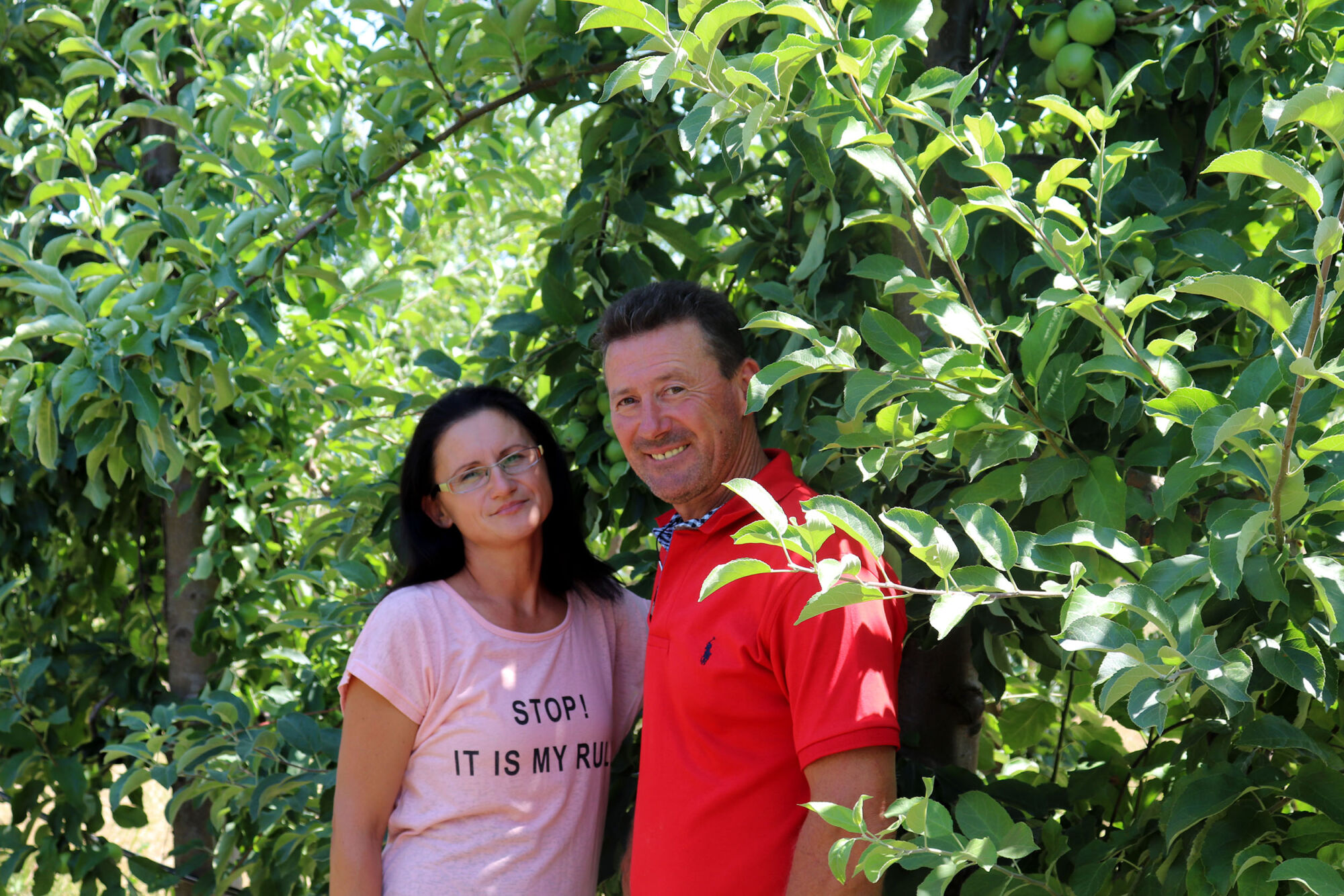 A fruitful endeavour: from apple farmers to successful entrepreneurs

Ljiljana Mitevska
After several years of extremely low buyout prices of the apples, Rahela and Pere Trantalovski, apple farmers from North Macedonia, struck gold by deciding to make pure 100% natural apple juice. Now that they are able to successfully sell it on their farm, they are encouraging other farmers to follow their example and to turn their hard labour into real money.

“The price of the apples has been simply catastrophic. So, instead of selling them for a miserable price, my husband Pere decided that we should create a product with added value – 100% natural apple juice! Like this, now we have money left in our pocket,” says Rahela Trantalovska.

Farmers like Rahela and Pere, due to the quantity of their production, often cannot sell it directly on the market but are dependent on a buyout done by middlemen who make huge profits for themselves by offering very low purchase prices to the farmers.

“We have come to a situation to be literally beggars although we farm and produce all of these products but then you have to sell them for nickels,” says Rahela. She explains that several years ago the price of the apples was so low, 1.5 denars (EUR 0.024) per kilo, that everyone threw them out and the region of Prespa was literally turned into a big landfill of apples.

“Despite of our desire and the idea to produce a final product, we wouldn’t have been able to succeed, if it wasn’t for the support of We Effect, to which we are very grateful and because of which today we have 100% natural apple juice!,” says Rahela.

Supported by We Effect and partner organisation National Federation of Farmers (NFF), as part of our IISEE project in North Macedonia, the Trantalovski household was able to start a sustainable and profitable business model, based on the market system development (MSD) approach, that aims to enable farmers improved livelihood and better access to markets.

Rahela and Pere Trantalovski now have a small apple processing unit. “I acquired some of the machines on my own, but I was also missing some of them. With the support of We Effect and NFF we got a pasteurizer and an apple washing machine, as well as the bottles for the juice,” says Pere.

The juice that the family Tranatlovski produces is made solely from their apples, without any additives, sugar or artificial sweeteners. “It is still not considered 100% organic. It’s because we are in a transitional period. You see, there is a regulation that two years must pass for a plot of land with apples to be cleaned from the use of any pesticides or fertilizers. After all the analysis are made by the competent institutions and a green light is given that the soil is clean, then we can label the juice as organic,” says Pere.

The mayor benefit of the Trantalovski household from the IISEE project is the fact that now they can sell the juice and any of their produce on the farm. This came as a result of the strong lobbying of We Effect’s partner NFF that succeeded to make legislative changes that allow farmers to become registered food operators and to legally sell their produce directly on the farm by using the model – on farm sales. Pere says:

Rahela explains that with the “on farm sale” everything has gotten easier. “We don’t waste time to offer our products to shops, supermarkets and middleman traders. Now, simply the customers themselves come to our farm and when they are happy with the product, they spread the word. We have actually realized a lot of sales from ‘word of mouth’,” she says, adding that they also advertise their products on social media, and they are using NFF’s online sales platform e-Farm.

“Realistically this is what we live from. It’s fine, we make a good living now,” Rahela is happy to say.

Apart from the apples from his own orchards, Pere is now purchasing apples from other apple farmers in the region on a contractual basis. “We have 10 cooperants that we purchase apples from. When the price was around 2 denars, we gave them 5 denars for their second-class apples that they couldn’t sell on the market as apples for consumption,” says Pere.

Rahela explains that like this the cooperants certainly earn more than selling the apples to a trader-middleman, but still, they don’t have huge earnings.

“Actually, our idea is to encourage them to follow our example so they too can start producing their own juice. Like that they will get an added value from their products and make so much more money from their labour. Because if we can do this, so can they!,” says Rahela.

She believes that this would contribute to a greater development of the community and better future for many farmers in Prespa, which is the most famous apple growing region in the country. She says:

Like this, the traders cannot condition us with the price, but we will be able to set the price ourselves for our products.

However, the middlemen making huge profits on the backs of famers, is not the only problem farmers like the Trantalovski household encounter. In their everyday work, they face diverse problems, but as Pere says one of their biggest problems over the past years are the effects of the climate change.

“The sun is so strong that burns and blemishes are created on the apples so we cannot sell them as first-class apples for consumption. Also, there are weather storms like we haven’t seen in the past, that can completely destroy the yield. Few years back, after a horrific storm, everything was destroyed – 100%. We had no apples! And then there is the lack of water, we have a problem with the droughts. The wells will be dry in a few weeks and there is no water and no irrigation systems,” says Pere.

But thanks to his resourceful personally, and certain investment, he has found a partial solution for at least one of the issues. “To save water we are using the drip irrigation system that I installed in all orchards. And in the future we would also like to install an anti-frost system and to put nets on all trees to protect them from hailstorms,” he unveils his plans.

Pere and Rahela Trantalovski are a very open-minded farmer couple, willing to take risks and to introduce novelties in their work on the path of making progress. They are also hardworking and committed and they seem to have passed these qualities on to their children, one daughter and three sons, who are interested to follow in their parents’ footsteps. So, for the Trantalovski household and family business, the future certainly looks bright!