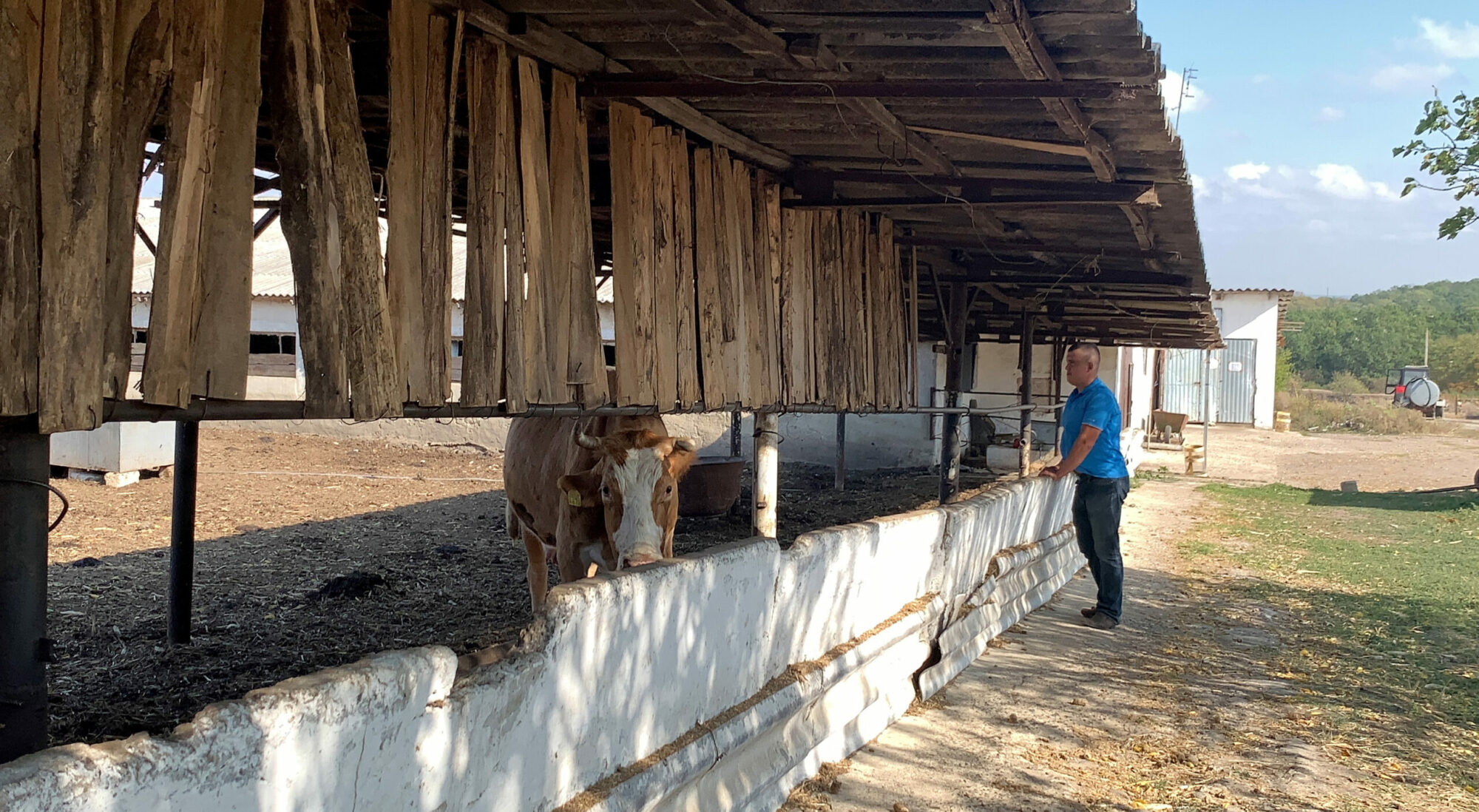 Ljiljana Mitevska
The future of agriculture and our food lies within the hands of young farmers like Andrian Dumitras. Despite of the challenges, such as difficult access to finance due to expensive loans, lack of collateral and unstable markets, he is willing to stay, cooperate and succeed in the agri-business in Moldova.

“Ever since I was a child, I dreamed of owning a small animal husbandry farm. After graduating from the agricultural college, I started the business with two to three milking cows. Now I have about 20 cows and some land with cereal crops,” says Andrian Dumitras, a 25 years-old farmer from the Iorjnita village in northern Moldova.

Born and raised on a farm, he says he is proud to have inherited some of the hard-working qualities of his parents. “I work from morning till evening every day. The animals do not have days off!”

Dairy farming is one of the most difficult branches in agriculture. Working hard is a prerequisite, but the corona pandemic inflicted some additional challenges on farmers.

“It created a lot of problems for us in terms of distribution, but we continue with the same pace. We have no choice, we have to provide the population with milk and we must keep the village alive,” says Andrian.

The corona impact is only one in the series of blows that negatively affected Moldovan agriculture lately. “The biggest problem in agriculture is not just the pandemic but the prolonged drought and the lack of access to irrigation that led to very high losses last year. I lost about 60% of the estimated grain harvest, while those from the south of Moldova lost even 90% of the harvest,” says Andrian.

With two thirds of the Moldovan population living in the rural areas and chiefly dependent on agriculture, the drought accompanied by the corona pandemic has clearly put a strain on food security.

Lots of farmers recorded losses. Some of them were forced to selling and culling of livestock, thus exacerbating their vulnerability and lowering recovery prospects. According to many, the help from the state was insufficient.

“Authorities do not take relevant measures. We need innovative projects and investments in irrigation, marketing systems and especially in concrete actions to adapt to the deeper changes of climatic conditions,” says Andrian.

He is particularly dissatisfied with the way the state treats young farmers. According to him, young people do not have opportunities for development in the villages where there is no elementary infrastructure, no fully functional water systems, or good roads.

“The majority of my friends after the student days either stayed in the city of Chisinau or went to work abroad due to lack of opportunities and poverty in the rural areas,” says Andrian.

Another burning issue for young farmers, and generally smallholder and family farms, is access to finance. Most farms remain poorly financed. The major obstacles for farmers are insufficient collateral options, almost no supply of long-term loans and high interest rates, amounting to 15–20 percent annually, with annual inflation below 5 percent in recent years.

“The loans are very expensive, and the banks take advantage of the lack of financial knowledge of the farmers,” says Andrian adding that as a result many farmers fail to meet their financial obligations and go bankrupt.

“I was lucky that my parents helped me, although I also took some loans. Now I reinvest almost all my income from the farm activities to pay the interest on the loans that are quite high. But I continue to work and hope I will succeed and grow as a farmer,” says Andrian.

He admits that being member of We Effect’s partner organization, the National Federation of Farmers of Moldova (NFFM), and taking part in various experience exchanges and trainings, has increased his chances of success.

“With the support of NFFM we created a small cooperative that has 7 producers of organic milk and cereals. The aim was to have a greater power to negotiate the price of milk when working with processing factories and also with buyers of organic cereal products,” says Andrian.

The cooperative not only strengthens the bargaining power of the young member farmers but it also helps them secure some discounts when purchasing agricultural inputs and equipment that they cannot buy on their own, individually.

Andrian and the cooperative members are also actively involved in the consultations organized by NFFM related to the agricultural policies. “Together with all farmer members of NFFM we try to defend our rights and interests in front of the state institutions. Yes, we are not always heard, but we put pressure on the authorities, and we show them that we are still a force to be reckoned with.”

Smallholder farmers play an essential role in Moldova’s agriculture and rural development and in the economy as a whole. Family farms generate over 62 percent of the total volume of agricultural produce of the country, thus contributing fundamentally to the overall food production and food security in Moldova.

“Farmers should understand that we are the pillars of the rural area and we need to produce and cooperate as united force,” says Andrian. He is urging, especially the young farmers, to fight for their rights. “Don’t ever give up! Because if we leave who will remain here!?”