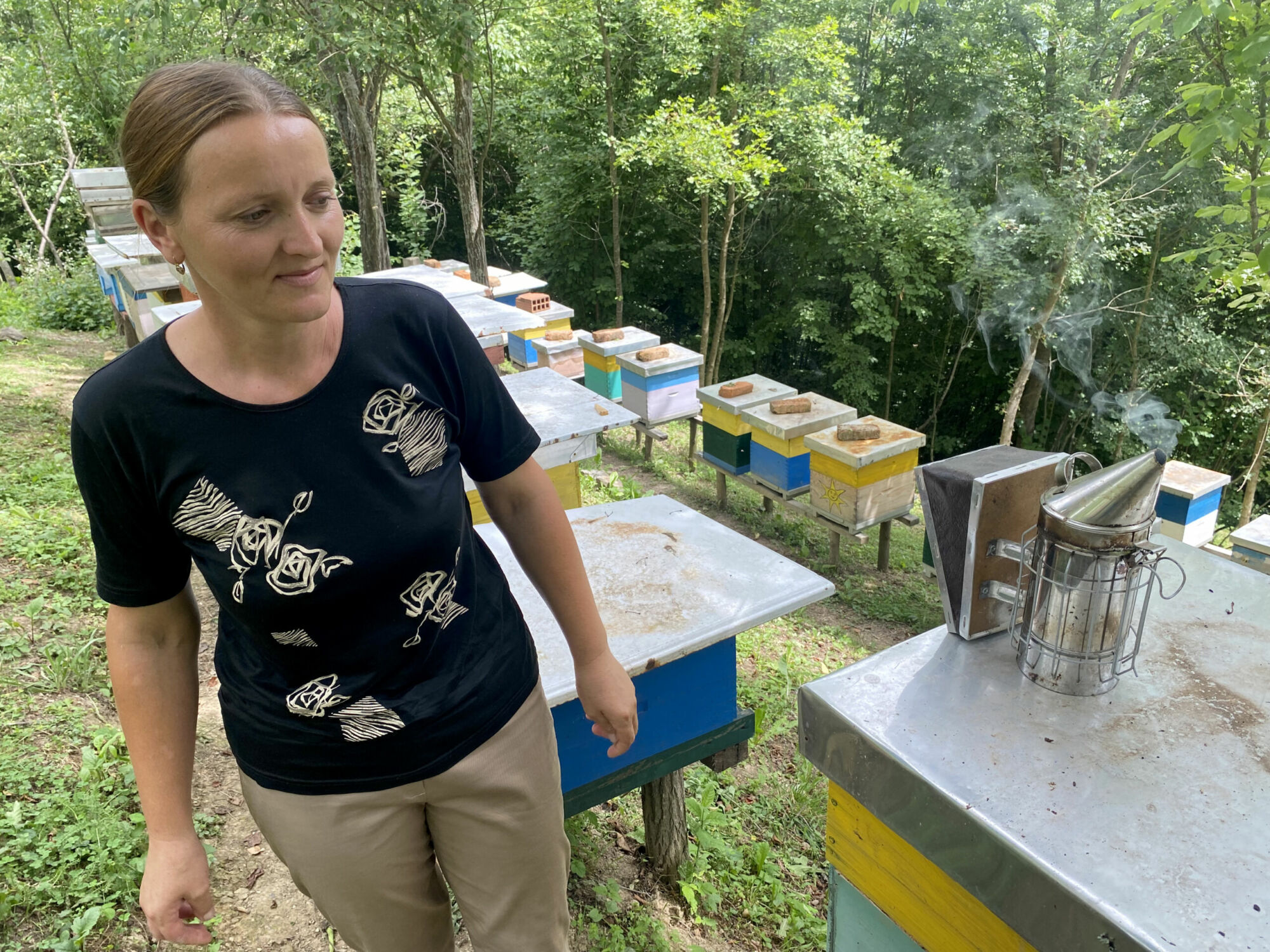 Beekeeping helped Behija’s family rebuild their life after the war

Ljiljana Mitevska
As the scene for the most violent armed conflict in Europe since World War II, Bosnia’s countryside still bears the marks of the devastation. And although rural life is full of challenges, farming offers a way forward. For Behija Dedić and her family it was beekeeping and fruit growing that kept them on their feet after returning in the country.

“Our first task was to build a house and start fighting for our survival,” says Behija reminiscing on the trying times when they returned to the country some 20 years ago, after the war was over.

Starting from scratch, faced with uncertainty and lack of opportunities in the rundown countryside, Behija and her family tried to make good use of all possible sources of income. That’s how they started beekeeping.

“I learned everything from my husband, it is his old hobby, which was passed on to him from his father. Before the war my husband used to be a beekeeper and he always loved doing it. Now we have 70 beehives divided into three locations. Two of them are close by, in our village Burnice and one is in Srebrenica,” says Behija, hinting that that is not all.

“As of right now, we also started sheep breeding. We have 16 sheep, not too many,” she says. And then there is also the fruits and vegetables production.

“Last year was our first year of making products out of the fresh fruits and vegetables. We work in alignment with nature, we make freshly squeezed juices, jams, ajvars. We produce something out of every fruit and vegetable that we pick,” says Behija.

But it’s a hard work. Behija’s day starts at 6 o’clock in the morning. First she tends to the farm animals, then she makes breakfast for the whole family, after which she is off to the fields. “My workday is at least 12 hours long. During the time of the year when we are processing our fruits and vegetables, it lasts even longer.”

Living became even more difficult with the arrival of the corona pandemic. “We were self-isolating and it kind of became the way we still behave. We are afraid of prices going up, how it could potentially affect our family. I wonder what will be with my children’s education. Moving classes online was not easy for any of us. It was stressful. On top of that, the healthcare was not adequate,” Behija complains.

But on the brighter note, people started using more bee products. “There are alerts for a new, upcoming wave and people want to have a good immune system. They are usually buying honey, propolis, and pollen. It really is helpful! All of us were infected but the symptoms were weak, and I believe that it’s thanks to our bee products that we are using,” says Behija.

However, generally, product placement is the biggest worry of the farmers. “We live away from the city. Also, many want us to have certificates for our products and to be registered but to do that we need to pay bigger taxes and we cannot afford that right now. Incentives are not adequate or even non-existent,” says Behija about her challenges as a farmer.

On top of it, inherited social norms and practices pose additional problems. Whether at the individual, community or institutional level, they are the major factors hampering rural women’s empowerment.

“Our mothers raised us very differently compared to how I raise my daughter. For them, it was important that we, the girls, are hardworking, that we are inside the house, and that we obey. Educating girls was not as important, many did not let girls go to school. They would let the boys, but it was as if the girls did not need an education, since they were going to get married. I did not want to put any of these pressures on my daughter. Now she is at the same college as my son, she has all the freedom and does not need to serve anybody like I had to. In the village, it is still common for girls and women to be detained for many things, like going out,” says Behija.

She is happy to see all this starting to change and actively contributes to the process of shifting the prevailing negative traditional norms that hinder women’s progress. With the help of We Effect’s partner organisation Vive Zene she received trainings in economic and gender equality which acted as a powerful incentive for her personal growth in both spheres.

“I worked on empowering myself, my family, people around me, my female friends, my neighbours. Everything that I learned I tried to pass on to other people,” says Behija.

Her influence is, of course, most visible on her husband Asim. “I am the one who sees all the changes since we are together all the time. She is freer and she puts forward good arguments. She would present me the steps of how some problems between a couple can be fixed without getting into an argument or additional issues. So, it became clear to me that it all makes sense, that those are real values,” says Asim.

The key to their success, according to him, is appreciating each other and equal participation in decision-making. “We agree on everything together, from sales and finances to the education of our children. And we work great together,” says Asim.

“Am proud and thankful for my family, us as a team, our good health, and how well educated and successful my children are. They are my biggest pride and happiness. I am proud that we can live off what we make, that I can earn my own money for myself and my family. We do not rely on charity. We never did. We do not sit around and wait; we take the matter into our own hands. We fight and we work!” concludes Behija.