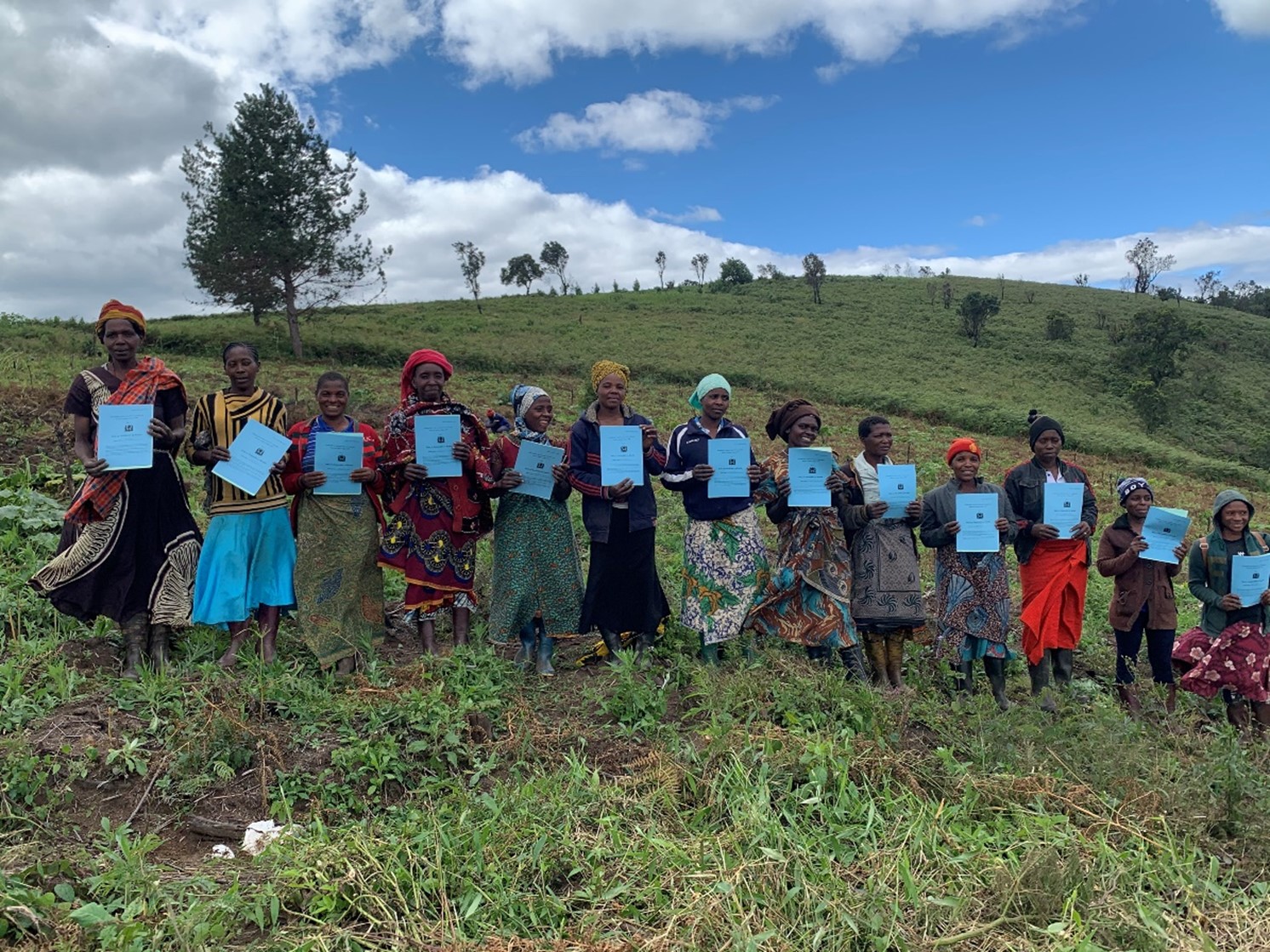 Catherine Waking'a
In Tanzania, the agricultural sector is dominated by women who actively engage in agricultural activities. At more than 80 percent of the agricultural labor force, women contribute significantly to the country’s food production.

Despite being the main land users and producers, women have less access, control, and ownership of this key resource. Their land rights are less secure which limits their economic opportunities and leaves them more vulnerable to poverty, hunger and gender-based violence.

The Tanzania land act and village act which was gazetted in 1999, grant equal right of ownership, and access of land to both women and men. However, customary practices regarding marriage and inheritance continue to discriminate against women in matters of land ownership.

The Tanzania National Bureau of Statistics, Women and Men facts and figures 2018, indicates that women have 9 percent ownership of land. In the Southern highlands’ part of Tanzania, majority of land is historically owned by men. This is attributed to cultural practices that exist in the area. This phenomenon contributes to increased inequalities which cause women to be economically weak and powerless. Lack of awareness on the land act and land rights to women aggravates the problem.

Southern Highlands Tree Growers Association (SHTGA) in partnership with We Effect is implementing a project that supports improved women and youth participation. The project in private plantation forestry will increase women’s income and household nutrition. In addition, the project conducts awareness on the right of women and youth to own, manage and have control of land so as to improve their economic well-being. Having access to land will enhance women and youth empowerment and increase participation in commercial tree growing.

SHTGA uses two approaches to facilitate ownership of land to women. The first approach is to create awareness in communities for them to allow female children to inherit land. The second approach is to work with village councils that have land banks to allocate the land to Tree Growers Association(TGA) members (men and women).

In 2019, SHTGA raised awareness during village councils’ sessions which were conducted on the rights of women to own land. Reaching a total of 56 participants (16 women and 40 men), the sessions were conducted at Iwungilo ward covering Ngalanga, Uliwa, Igoma and Iwungilo villages in Njombe. The sessions were well attended by representatives of village councils, women, elderly people, religious leaders and professionals.

Securing land tenure for women: A story of Christine Mtewele

Among the beneficiaries was Christina Mtewele, a young lady from Kiwamiu Tree Growers Association (TGA). Christine expresses her heartfelt gratitude to the village council and TGA for ensuring that women get land.  She is more than elated and encourages more women to join or form Tree Growers Associations. She explains that, through the association, members learn about the right to own land which will provide opportunities for financial freedom. “I managed to plant one acre of snow peas and am now waiting for the rainy season to plant avocado fruits,” she says.

Christine, who is now a proud landowner, adds that, “many women in our villages are unaware of what is spelt out in law on land rights and lack assets or financial muscle to fight for their rights.” I managed to plant one acre of snow peas and I am waiting for the rainy season to plant avocado fruits,” she proudly explains.

The land title allocation has motivated many people in Uliwa village. More specifically, women who are now joining Tree Growers Associations. For instance, in 2020 a new Tree Growers Association was formed at Uliwa village. From the 64 members, 34 are women. These new memberships will enable women mobilise the available resources and unfolding opportunities available in agroforestry, which will help solve their social and economic challenges.

Secure ownership and control of land has a positive effect on women’s empowerment. It enables women invest productively in agriculture leading to economically empowered households.

Access to affordable financial services for smallholder farmers is a major constraint to achieving targets in rural development strategies. This affects women more than men due to the collateral required to access financial services (credit).  Women do not have the required assets which can serve as collateral.

“In our family, no woman has ever owned land. I am the first one to have my name inked on this special document. I am now a proud owner of one acre of land” says a joyous Monica Mwelwa, member – Kiwamiu Tree Growers Association (TGA).

“Immediately after getting my title commonly known as the certificate customary right of occupancy (CCRO), I planted Irish potatoes. Since then, I have harvested 80 bags. She further explains that “I earned 1,035 USD, which I used to pay school fees for my children and also procured fertiliser for my avocadoes.”

Certificate Customary Right of Occupancy (CCRO) is a legally certified document showing evidence of customary land ownership. CCRO generates benefits such as increased land security, reduced land conflict, increases the value of land, and protects women’s rights. In 2020, the project supported processing of CCROs for 60 members of KIWAMIU tree growers’ associations. 24 CCROs were distributed to men and 36 to women.

Ana Mbuligwe, the vice chairperson of the association, explains that, “A journey of a thousand miles starts with one step, and this is a step in the right direction. It is a progressive statement by Uliwa village to empower women secure land tenure.

Women’s right to land is a human right. It is essential to realising their rights to equality and to an adequate standard of living.

Prevailing gender inequalities, combined with the amplified effects of multiple and intersecting forms of discrimination, have continued to undermine women’s exercise of their rights to land and other productive resources.

Ana emphasises that, “Due to cultural beliefs, it’s difficult for women to own land. However, through gender transformative approaches, the association dismantles patriarchy and delivers justice.” She adds, ” we will continue to raise awareness and seek freedom from patriarchy and all forms of oppression against women empowerment.”

I have now managed to plant avocado fruits in my one-acre piece of land and I look forward to harvesting after three years,” Ana remarks. Despite the different constraints, women in this part of the world have secured a title and are now proud landowners.

Consequently, this will boost her family’s income and nutrition. Farmers agreed to use their allocated land to plant avocado fruits. The trees are expected to start yielding fruits in the second year. One acre contains a total of 82 avocado fruit trees. The minimum production per tree is 50 kg; therefore, expecting to harvest 4,100 kg per acre. At a current market price of 1,500 TZ shilling (7 SEK) per kg, each farmer will earn 6,150,000 TZS, equivalent to (28,490 SEK). This will increase income at the household level, improve food security and create diversification in other economic activities.

We Effect views land as a critical resource for fostering gender equality. We continue to support co-operatives and farmer organisations that are pressing for the right to land for smallholder farmers and indigenous peoples. Together with organisations specialised in land issues, We Effect is helping members to exercise their tenure rights and strengthen the ability of small-scale farmers to negotiate and defend their interests.