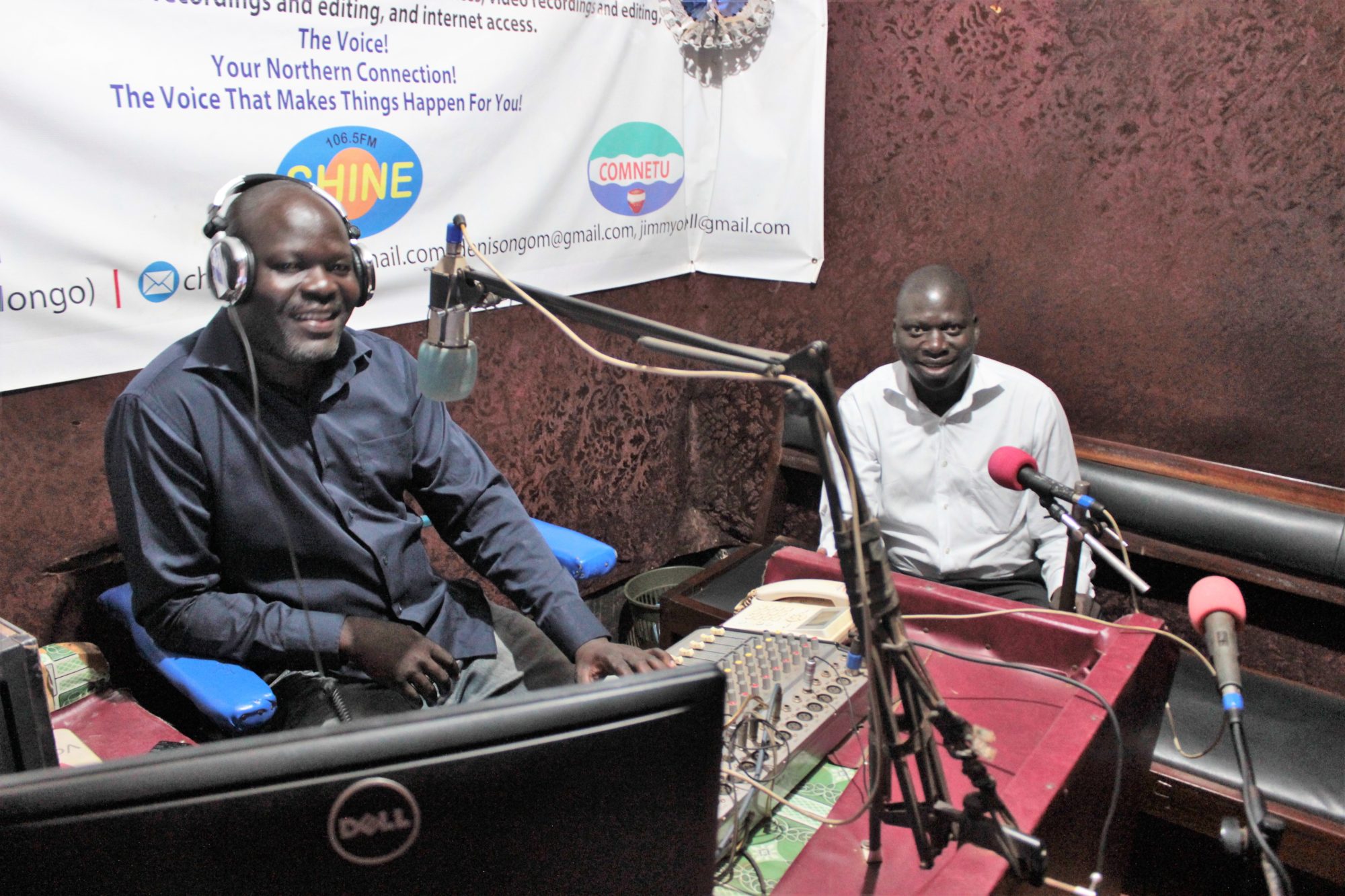 The frequency set to ”equality”

Mårten Wallendahl
We enter the thick studio door in the turquoise stone house along the sandy street in Ugandan small-town Apac. A loud radio jingle in the local language Lango, is streaming from the speakers. From here, both entertaing music and deep and life-changing discussions are broadcasted each day. And the mission of We Effect, to promote gender equality, is trumpeted out to radio receivers in northern Uganda.

Uganda is celebrating its Independence Day today, so no guests are invited to the radio studio, but pre-recorded interviews and music are heard on the frequency 92.9 Mhz this Tuesday. Moses Otwang always feels welcome at the radio studio, no matter the day. He works as a field officer for We Effect’s partner Acfodes in the Apac region. Moses´ office is next doors, so he´s a regular at the radio station both for business and pleasure. Moses and the radio station’s front man and host, Bob Gowan, sit here every Friday morning in a live show to discuss equality and topics related to gender.

Ben appears from a dark corner in the hot studio. He’s at work despite the national holiday. The radio station is for him, as much a passion as a workplace. The radio is the most important media in the region, where newspapers and television sets are rare.

Bob is clearly happy to see Moses, a long time friend. They always discuss social development and gender issues both on and off air.

Radio is accessible to all

Acfode works with gender equality, funded by We Effect since long. Traditional concepts are still strong here, where girls’ education is not always certain and women’s social impact is often undermined.

– That’s why we work with both women’s groups and individuals through our three projects. They deal with everything from economic and legal education, to practical issues in schools and homes to increase the understanding of a more equal society, Moses explains.

Bob sits at the control board of the studio, comfortably behind the microphone. He nods. For him, Acfod’s agenda and mission is well-known since way back. Together, they want to reach a new audience with their message for Ugandan women, to play a bigger role in society. For this, they need to target both men and women.

In theory, this should not be a problem. Legislation is in place, and a hundred meters from the radio station, the women’s parliamentarians have their local office. But in the remote villages, the traditions still flourish. Men are sole to decide on both economy and local policies. Acfode has still gained a strong position in gender work here, since equality topics are constantly recurring themes, above all – in the radio broadcasts.

– We discuss as many topics as possible. We talk about education, finances and family violence, Bob says. And audience engagement is great, as broadcasts reach around one million listeners.

The radio contributes with both information and entertainment in this area, where the range of events is quite limited. The fact that listeners are invited to a dialogue on air, also plays an important role in a society where women are not always heard.

– Mostly women call us at the show, but more and more men want to participate. They share own experiences, but sometimes also question our opinions, as we promote a greater influence from women in the local society, Bob says.

At this point he has become quite used to answering listener questions about gender topics together with Moses.

Bob says that his radio station has now become more influential, as several competitors are lacking funding and dropped out of business. He is also slightly worried about the future of his own broadcasts, but adds that some companies and also private individuals buy advertisements on air. You simply pay to be heard. And as long as Acfode is financed through We Effect, there is at least expertise to fill the shows with substance discussions on relevant topics.

Equality issues will remain an important topic, according to Bon, why he sees the need to continue the hour-long gender equality show once a week.

– Many families own only one phone, controlled by the husband. Some men do not want their wives to get new ideas or have their family issues dealt with in public. So, some men don´t allowed their wifes to call our show, Bob complains.

Nonetheless, they see more and more women calling in.

–And many women confirm to us they have been helped by our advice and that their position in the home has improved, as a result of our shows, Bob says, Moses nodding happily.